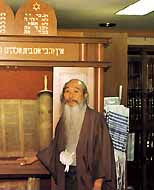 Though I have never heard of this theory before, it has apparently been around for quite some time. I only heard of the Japanese-Jewish connection today, when I read a blog post titled “Are The Japanese Actually Jewish? Looking at the mysterious connections between Japan and Judaism.”

In this post, similarities between the two cultures are presented. The theory is that due to the never ending warfare in Israel, the tribes dispersed all over the world AND some of them found their way to Japan. So what are these connections?

For example, the Japanese Shintoist Holy day is the Yamaboko Junko, or “Going atop the Mountain to lay to rest the Shrine”. The day Noah’s Ark rested atop Mount Ararat lies on the same day. The word “Essa”, which is a carrying chant chanted by the holders of the Omikoshi, or portable shrine, is a word which really has no meaning in Japanese but means “Carry” in Hebrew.

Here is another one:

One of Japan’s largest festivals, the Gion Festival, is believed by many, including the Gion Festival officials, to be the same as Ancient Israel’s Zion Festival. The month long festival is almost identical in each event, date, etc. The artwork depicted on the portable shrines in the festival are from ancient Japan, but are renderings of landscapes in the middle east – camels walking the desert, pyramids, Baghdad Palaces, and most surprising is a grand picture of Rebecca offering water to Isaac which is confirmed to be a rendition of Genesis 24 in the Old Testament.

Japan and Judaism are the last things that I would pair up in my mind – but that only goes to show how much I have to learn. Have you heard anything about this connection?