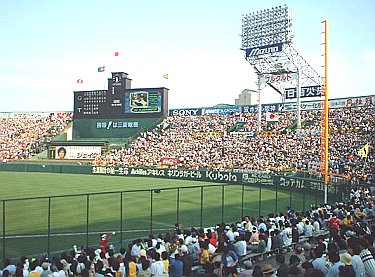 Koshien. In Japan this word is synonymous with a diamond of drying grass, young boys in their limp white uniforms sweating under the hot summer sun, focused on the pitch that could change the course of their game. Reaching the Koshien for the finals is the dream of every high school baseball team all over Japan.

The Koshien Stadium is located in Nishinomiya City of Hyogo Prefecture. It is not only the home stadium of the Hanshin Tigers, it is also the oldest baseball stadium in Japan. The first baseball game held here happened in 1924, and the legendary Babe Ruth played an exhibition game when he toured Japan in 1934. The Koshien has been home to the spring and summer National High School Baseball Championship for the past 87 years. In fact, these tournaments are so deeply linked to the stadium that only called as ‘spring koshien’ or ‘summer koshien’. The finals of the summer koshien is one of the most watched national sports events, even exceeding the viewership of professional games. Spectators brave the sweltering August heat and pack the stadium to full capacity to watch the nation’s best amateur players make a name for themselves. Famous pro players like Matsui Hideki, Daisuke Matsuzaka and Suzuki Ichiro, the first Japanese-born player in the Major Leagues, all played for different teams in the Koshien.

In January 17, 1995 the stadium suffered damage from the Great Hanshin Earthquake. Improvements are currently being don during off-season and construction is scheduled to end at 2010. But even then the Koshien will remain a legacy of the high school amateur sport.