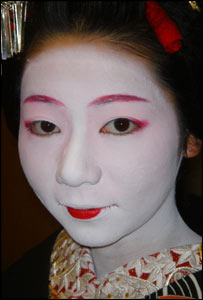 I was watching cable television the other day when I saw this program about a young girl who left school to train to become a geisha. I do know that geishas still exist in modern day Japan but I haven’t really paid attention. That is, until I watched this documentary created by BBC Four.

The documentary is all about a 15-year old girl named Yukina. She left school and her family in order to train as a maiko. This is the Japanese term for an apprentice geisha. Did you know that in Japan, 15 is the minimum age required for girls in order for them to train as a maiko?

So there she was, practically a pariah in the eyes of her family and her friends. You see, Yukina has always dreamed of becoming a geisha. Her parents and friends didn’t seem to approve of her decision to drop out of school and go to Kyoto to train, though.

The documentary showcases her journey as she trains to become a maiko under the Okasan, or geisha mother. I found the whole show captivating as it showed a whole new light to what a geisha is and what a geisha does. It also highlighted some facts that I never knew about. For example, did you know that a geisha’s kimono costs thousands of pounds? More so, a geisha has to have about 7 of them in her wardrobe!

If you have not seen this documentary, visit , where I saw an online version.