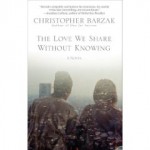 Here is a gift idea for your friends or family members who love to read and who are into the Japanese culture. Author Chris Barzak is launching his second book today. Titled “The Love We Share Without Knowing”, the book was built on his experiences when living in Japan.

It is actually a collection of short stories revolving around the lives of the Japanese natives, visitors, and supernatural beings. In a feature article at Valley 24, the book is described as:

The short stories are inter-connected, each one picking up indirectly where another left off. His beautiful use of words and descriptions paint vivid pictures of both wonderful and devastating images. Barzak meticulously addresses taboo issues in Japanese culture, such as suicide and homosexuality. Amid fairy tale references and unlikely circumstances, Barzak lifts the proverbial veil and brings these subjects to light in thoughtful and emotional ways.

Near the beginning of the novel, four friends create a suicide pact. Barzak says in America, people tend to commit suicide on their own, suicide groups have been a trend in Japanese culture.

I found this particularly interesting as I had just read reviews of Famous Suicides of the Japanese Empire. I actually wrote a post on this recently. Barzakâ’s book, however, seems to offer a more realistic concept of the Japanese culture. The stories, however, focus strongly on love – not solely romantic love but love that can exist between people: life partners, family members, friends, and even for one’s self.

If you want to get a copy, try looking at Amazon. I found it for a little less than $10.