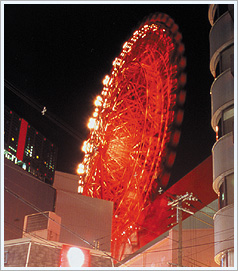 If you have ever been to Osaka, you would know about one of the first things that people notice upon arrival – a gigantic red ferris wheel. Dubbed the Hep Five Ferris Wheel, this structure is at the roots of the Japanese people’s passion for this ride. Come to think of it, not too many people would probably know about this passion. That’s why I thought to share excerpts from a feature article in Yomiuri Shimbun:

The Hep Five Ferris wheel is one of the first such rides in the nation to be installed not in an amusement park but in the heart of a city.

When the ride was built inside the Hep Five building in 1998, people were amazed by its eccentric location and eye-catching appearance.

While the world’s first Ferris wheel appeared in 1893 in Chicago, the first one in Japan was constructed in Osaka more than 100 years ago, at a time when the city was intoxicated by the nation’s recent victory in the Russo-Japanese War.

An advertisement for that attraction, dubbed the “Great Wheel,” features an illustration of the ride, which was decorated with several Japanese flags, and some exhilarating promotional hyperbole: “You can’t be called a citizen of this conquering nation without having experienced the excitement of this new ride.”

The advertisement was carried on a guide map for an exposition held from April to June 1906 at Tennoji Park in Tennoji Ward to commemorate victory in the war. The ride was one of the expo’s featured attractions.

Today, this ride is an ubiquitous part of amusement parts and fairs – in Japan and other parts of the world.