You may have heard this name only now or you may have heard about it many times in the past but did not bother to find out what it is. Persimmon is a fruit of Chinese origin that looks a lot like tomato and is a popular autumn and winter fruit. 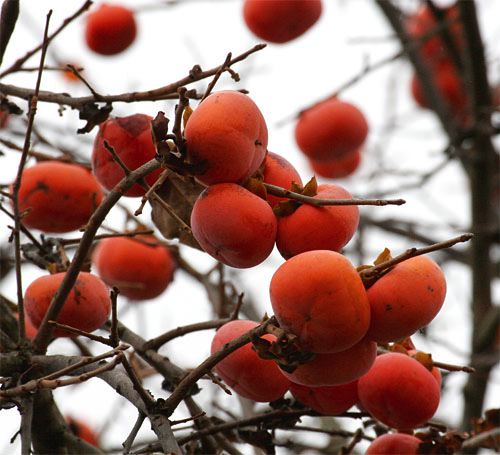 Originally, it was cultivated in Japan and China for centuries. It is called shizi in Chinese and kaki in Japan. Its botanical name is diospyros kaki and considered one of the oldest plants in cultivation.

From China, its cultivation later spread to East Asia (Japan in particular) then much later to California in the U.S., southern Europe in the 19th century and then to Brazil in the 1890s. Today, it is also grown in Italy, in the Mediterranean regions as well as in the U.S. and the Middle East.

In Japan, two varities of persimmon are available – the fuyugaki and jirogaki. The fuyugaki variety is the sweet and juicy one with soft flesh. They are in season from October to December.

Dried persimmons called hoshigaki are also available and can be bought at fruit shops. The shibugaki variety is best enjoyed in Japan in its dried form.

How to Eat it Right

Persimmons are best eaten ripe. In fact, some Japanese love to eat it in its most overripe form when it’s in the same consistency as a yogurt.

To eat a persimmon, one needs to remove the top portion first (with the leaves) by slicing it off. Next, get a spoon, scoop the flesh inside then eat it. It’s that simple.

Another way is to slice the fruit like you would a tomato after taking off the top part. You can also peel the skin if you want.

One traditional Japanese way of preparing this fruit is by putting a small amount of alcohol such as vodka in the persimmon and leaving it in the refrigerator overnight or for a few days. The role of the alcohol here is to hasten the decomposition of the fruit so it can be eaten in its best form.

It should also be noted that persimmons can be eaten either fresh or cooked. It can be cooked as a marmalade, jam, compote and can be used in salads as well.

Apart from humans, birds also love to eat persimmons. They feed on the fruit when left hanging on the tree late in the autumn season.