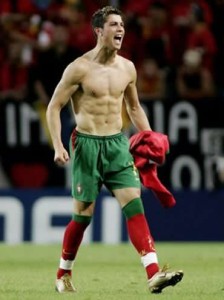 The World Cup always attracts immense amount of attention. Every four years, when it is held, the whole world stops in its tracks to follow what’s going on in the world of football. Of course, part of the reason for the large following (aside from the love of the sport itself) is the fact that tons of money is spent on advertising. That means that sponsors will not hesitate to advertise their own wares.

This time around, Castrol is jumping into the advertising bandwagon big time. Have you ever heard of the “wonderful” robot made by Castrol Japan? If not, then check this video out at the World Cup Blog.

So what can the robot do? If you took the time to watch the video, you would know that it can kick a football (just like a football player does when making a free kick). But it’s not just like any kicker – the machine can kick a ball at a top speed of 200 kilometers per hour! That’s 70 kilometers per hour more than the world record that is held by famous football player Cristiano Ronaldo! Of course, there really is no comparison (despite the allusions made by Castrol executives) here as Ronaldo is made of flesh and bone while the machine is, well, a machine (made of nuts and bolts?!).

In any case, this robot will certainly draw a lot of attention, if only for the fact that it doesn’t look anything like a football player and that it has awesome kick powers.