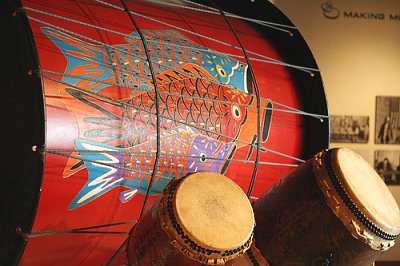 Taiko stands for “big drums”, but the term has spread to cover various sizes of Japanese drums. Such drums are used in the recent performance art of ensemble drumming called kumi-daiko. Most taiko drums are played by striking drumsticks on the stretched drum heads. These days taiko drums are often featured in local festivals, but they are also used in religious ceremonies to call for rain and ward off plagues. Back then they were only played by males due to the Buddhist and Shinto beliefs but these days men and women are part of taiko performance groups. They have also been used in warfare to command and direct armies. Their thundering beats are the only sounds that can be heard above the noise of a the battlefield. But taiko fits into a more refined cultural setting as well. Taiko drums used in gagaku, imperial court music, are some of the most elegantly-decorated and refined Japanese instruments.

The first step in making a taiko drum is hollowing out a tree stump to create the drum’s shell. This takes month of careful carving to achieve the perfect proportion. Once the desired shell is achieved the drum heads are stretched and fitted over the ends. Taiko drums are classified depending on how the drum heads are fastened to the drum. Byou-uchi daiko have the heads nailed to the drum’s body and cannot be tuned. Tsukushime-daiko have the heads sewn to iron rings, which are then laced with rope around the drum’s body. The latter can be tuned by changing the tension before each performance.These drums’ unique sound comes from the high amount of tension of these drum heads and the sealed resonating cavity in between.

Rhythm plays an important part in taiko performances. The balance between the silence and each drumbeat gives a whole new sense of drama and tension in the music. Performances with these drums can be powerful and dynamic, entertaining the audience with choreographed ensembles and flashy solos.The love for taiko has extended beyond Japan’s shores. Taiko drum performance groups have sprung up in different countries all over the world. Not only is it fun and exhilirating, it’s a great way to foster comaraderie and teamwork among friends.