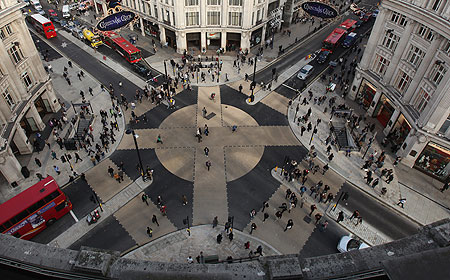 Yesterday, Londoners were treated to a taste of what it’s like to cross the streets of Tokyo. Oxford Circus, which is considered to be the “heart of London’s West End shopping and entertainment district,” opened the first ever Tokyo-style pedestrian crossing in their part of the world. The style of this pedestrian crossing – as you can see from the photo, courtesy of Mirror.co.uk – allows people to cross the intersection diagonally, on top of being able to cross in straight lines. Obviously, in order for this scheme to work, traffic in all directions must be halted all at once to give way to the pedestrians.

According to a report by AFP, London authorities got the idea from the crossing in Shibuya, a well-known area in Tokyo. The mayor of London, Boris Johnson, was quoted as saying:

“This project is a triumph for British engineering, Japanese innovation and good old-fashioned common sense. The head-scratching frustration caused by the previous design is over and we’ve brought one of the world’s greatest crossroads into the 21st century. Being able to cross in an oblique rather than a perpendicular fashion will make Oxford Circus incredibly more efficient for the millions of pedestrians and road users that use the crossing every year.”

Indeed, why haven’t others thought of this before? Trust the Japanese to come up with such a simple solution to a simple problem!

So how much did the scheme cost the government? A whopping five million pounds, no less! We’ll see in the next few weeks – or months – if the scheme is worth it. I have a feeling it will be. 😉