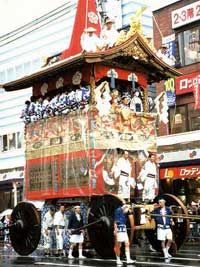 The ancient capital of Japan, Kyoto is taken back in time during the Gion festival, by Yasaka shrine (gion was the old name of this shrine.) Gion festival is one of the biggest festivals in Japan. This Japanese festival begins July 1st and lasts until July 31st. At this time, there are many street vendors with games and Japanese festival food. Also, many people who go to this festival wear yukata and geta, which are traditional Japanese outfits. It is said that the summer of Kyoto begins with the Gion Matsuri. It is a traditional summer festivity. Gion festival was started in 869 A.D when a bad plague spread through Kyoto. In the first festival, young men carried numbers of wooden floats. It was a divine intervention to stop the plague. The plague soon ended, and this event became a popular festival. In the Edo Era, the current form of the decorated floats appeared in the festival.

There are many events held during this festival, but the highlights are Yoi-yama on the 16th and Yamahoko-junko on the 17th. At Yoi-yama, people open the doors of their houses to show their treasured old folding screens. Yamahoko-junko is the parade of colorful floats through downtown Kyoto. The floats are pulled through the streets by teams of men dressed in traditional costumes. Each of the large floats carries musicians.

There are two kinds of floats: yama and hoko. Yama are smaller floats (weight: 1.2 ton – 1.6 ton, height: about 6m) and carried by people on their shoulders. Hoko are giant floats (weight: 4.8 ton – 12 ton, height: about 25m) on large wooden wheels and pulled by people. There are 32 floats in the parade: 25 yama floats and 7 hoko floats. The floats are decorated with tapestries or fabrics from Nishijin, Kyoto. Many of them were imported from India, Belgium, Persia, Turkey and other countries in the 15th century.

The most interesting thing to see during yamahoko-junko is the turns of big floats at an intersection. They are hinged on blocks of wood to get them to turn at right angles. Men pulling the floats chant loudly, “yoi, yoi, yoi to sei! ” accompanied with traditional Japanese music played by people who are on the second story of the two-story floats. Yamahoko-junko is the one thing you can not miss during this festival.

Kyoto is located in 200 miles west of Tokyo and next to Osaka. It takes about 3 hours from Tokyo to Kyoto.