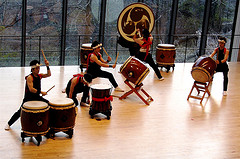 Music is an inherent part of most any culture in existence and the Japanese culture is not exempt from this. One of the significant aspects of Japanese music is their unique art of drumming, called wadaiko or traditional Japanese drumming in English. Wadaiko makes use of traditional drums called taiko. In some cases, wadaiko is also used to refer to the drums themselves.

Though largely considered Japanese today, the origins of wadaiko can actually be traced back to China. These large drums were carried over about 1000 years ago. The original drums from China were made of wooden slats. The innovative Japanese noticed the inferior sound resulting from the wooden slats so they worked on a new way to produce the wooden frame. Instead of using wooden slats which were joined together, the new waidako was made from a single piece of wood.

Japanese drumming was used early on in relation to martial arts activities. Today, however, wadaiko ensembles are well known in many parts of the world for leisure purposes. Daihachi Oguchi is considered to be the father of modern taiko and the popularity of taiko performances has been attributed to him. Since then, there have been many individuals and groups who have emerged to introduce taiko performances to the rest of the world.

Today, taiko performances have evolved to include flashy choreography. The music itself has also evolved to incorporate modern music elements such as pop. If you want to find out more about wadaiko by experiencing a performance live, try to check out your local Japanese embassy or cultural office. The chances are that there will be at least one event showcasing wadaiko.