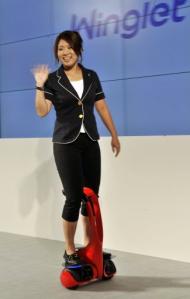 Toyota Motor of Japan announced a new gadget yesterday and it is said to be the Segway killer. The Segway was introduced some years ago and has become a popular means of transporting one’s self around easily.

The Winglet, as the new electronic scooter is called, can be controlled by shifting your body weight. By doing so, the rider can go forward, backward, and turn left or right.

So just how fast can the Winglet go? A smooth 6 kilometers per hour. I don’t know if people like me would like to go that fast, though. What I like about the Winglet is its cool design, as compared to the Segway.

Called the Winglet because of its fleet nature, it is the first gadget to duplicate the celebrated, and often mocked, navigation system of Dean Kamen’s Segway Transporter: self-balancing through gyroscopic sensors detecting the gentle directional tilts of a rider.

According to Toyota, they will begin testing three different models at a few Japanese airports later this year, as well as some popular malls. The feedback received from customers will help determine whether Toyota will mass-market the gadget for sales everywhere else.

Come to think of it, though, the Winglet would not stand a chance if it were to be pitted against the Segway in a race. The Segway looks sturdier and IS probably sturdier. So why do they call it the Segway killer? I honestly don’t know – perhaps it has more features. Has anyone tried this?